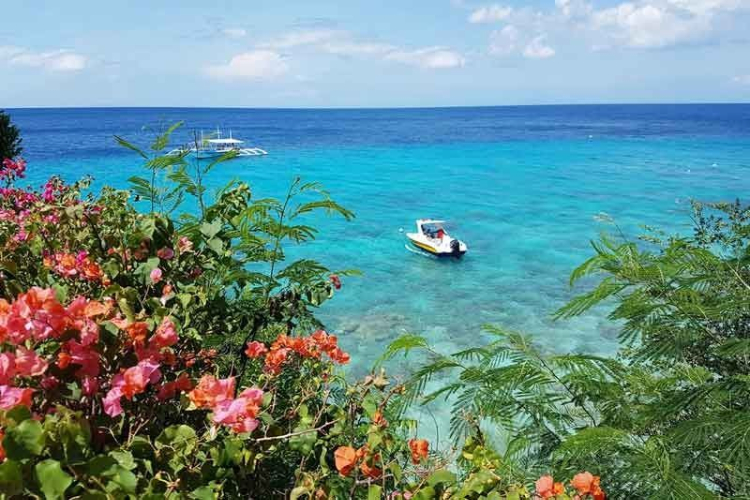 MANILA, Philippines — Talented young dancers from various municipalities in Cebu provided entertainment during the welcome dinner hosted by Gov. Hilario Davide III during the Ambassador’s Tour held from July 9 to 15. Each group performed lively dances depicting their local fiestas in a production number reserved for VVIPs – presidents and heads of state – highlighting Cebu’s many festivals, ending of course with the Sinulog.

Now on its 12th edition, the Ambassadors’ Tour is a flagship project of the Philippine Foreign Service Posts in the US, together with our Departments of Foreign Affairs and Tourism and the Tourism Promotions Board. The program enjoins Filipino-Americans from across the US to revisit their homeland and encourages them to promote the beautiful Filipino destinations to their friends and colleagues in the US, thus becoming ambassadors themselves.

“Each and every one here is an ambassador of goodwill,” Consul General Adelio Cruz said as he surveyed the crowd of some 320 delegates who enthusiastically took selfies with the young Cebuano performers. “Their love for country is overwhelming.” 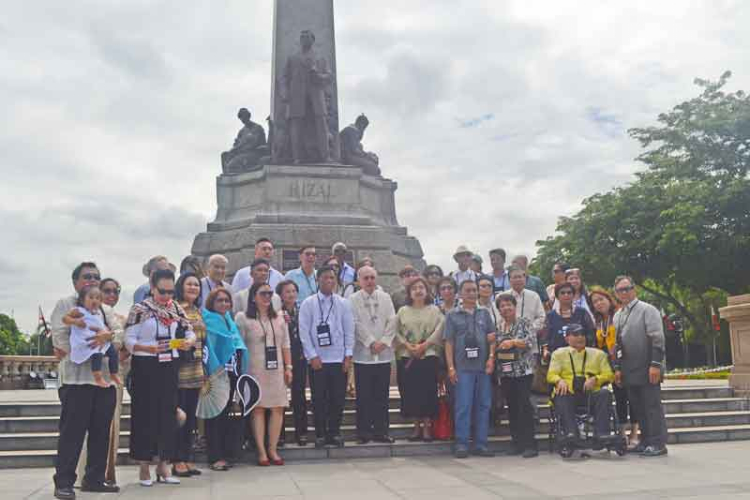 The delegates hold a wreath-laying ceremony at the Rizal monument

The Ambassadors’ Tour this year hosted delegates from Dallas, San Diego, San Francisco, Los Angeles, Michigan, Hawaii and Guam. Their whirlwind visit started with a wreath-laying ceremony at Rizal Park and a tour of the University of Santo Tomas Museum and the Metropolitan Museum, bringing them from the historical to the contemporary.

In Cebu, the delegation went on a heritage tour straight off the plane. “As soon the over 325 Filipino-American participants from all over the US landed at the Mactan International Airport, we immediately felt the genuine warmth and hospitality of the people of Cebu. Charming and elegantly dressed representatives from the DOT warmly welcomed each member of the tour with genuine smiles, giving a glimpse of what to expect for the next few days,” said Cruz.

Among the stops in Cebu were Fort San Pedro, the oldest triangular fortress in the country built in 1565, as well as the iconic Magellan’s Cross and the neighboring Basilica Minore del Santo Niño. At the Magellan’s Cross, local women said prayers for the delegation, swaying back and forth while waving candles and chanting for good health, success and safe travels for this leg of the tour.

A Filipino sojourn would not be complete without pasalubong shopping and the delegates filled their baskets to the brim with dried mangoes and other local delicacies after a visit to the Profood Dried Mango Factory.

Day two in Cebu had the group split in two. One group enjoyed a Suroy-suroy sa Sugbu Tour through various cities in the province for more cultural heritage experiences.

In Carcar, the group witnessed bolo making and basket weaving. They filled their bags with the crispy yet melt-in-your-mouth chicharon that Carcar is known for.

They said a prayer at the Church of Argao as well as the Mother Mary Shrine in Sibonga. Along the way, they sampled the famous Torta de Argao. 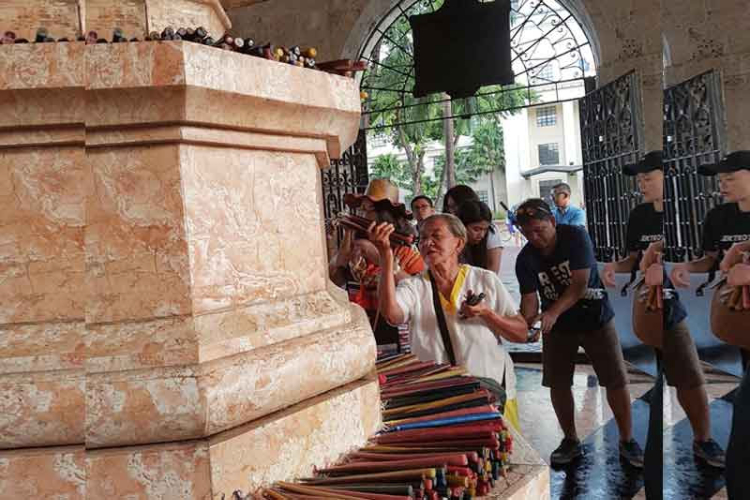 A local woman prays for health and safe travel for the delegation at Magellan’s Cross in Cebu.

The other group – made up of the more adventurous – left early for Oslob and enjoyed the unique experience of swimming with the whale sharks. Shrieks of surprise and delight could be heard from the boats of tourists and many got underwater selfies with the butanding to show friends back home. The group then had an island feast and admired the clear waters and fine sand of Sumilon.

Cruz said, “Our visit to Cebu, a first for many, was viewed by everyone as a truly exciting event. For some it was a unique opportunity to see the beautiful sights of the province. For others it was an opportunity to rediscover their roots, meeting long-lost brothers that they hadn’t met for decades.”

For Los Angeles Board of Public Works Commissioner Joel Jacinto, the trip to Cebu became extra special when he spotted, for the first time, a portrait of his grandfather displayed prominently on the fourth floor of the Cebu City Hall. His grandfather was the very first mayor of Cebu, making it a reunion of sorts for Jacinto, who became emotional as he talked of the importance of his roots in the Philippines. Being part of the Ambassadors’ Tour, returning to the Philippines and rekindling his love for the country – “It renews the panata.” 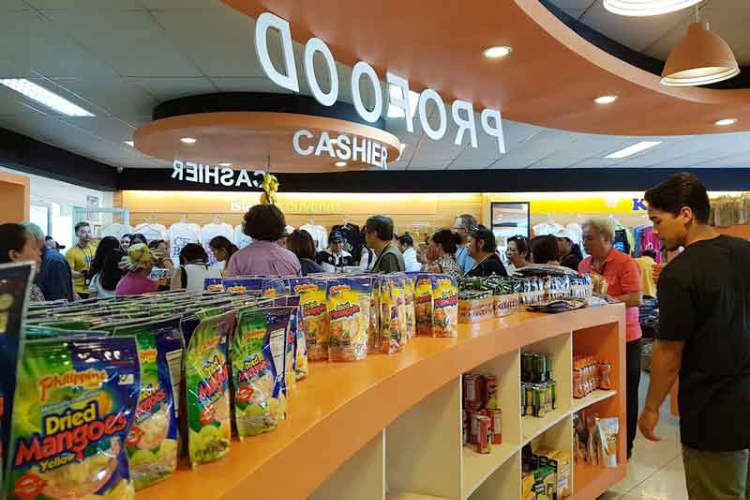 A long queue forms at the cashier of Profood Dried Mango Factory as members of the delegation shop for a taste of Cebu to bring home.

Moving over to Bohol, the delegation had a countryside tour, an excursion to Balicasag Island and of course visited the popular Chocolate Hills. Others chose a farm tour at the Bohol Bee Farm and the Maribojoc Demo Farm.

Previous Ambassadors’ Tours have taken visitors to Metro Manila, Tagaytay and Davao, among others. Representatives from Los Angeles-based Filipino organization SIPA (Search to Involve Pilipino Americans), who have joined several Ambasadors’ Tours, were pleased that the tours now focus on the provinces and destinations that they would otherwise not be able to explore. Already, they are planning their next visit to the country, a vacation in Palawan.

Dading Clemente of Rajah Tours has been in charge of the logistics from the very first Ambassadors’ Tour (then called Ambassadors, Consul General, Tourism Director Tour to the Philippines). She shared she was “at the right place, right time” when she was approached by then Philippine Ambassador to Washington Albert del Rosario, with the endorsement of Secretary Alberto Romulo, to organize the program in 2005.

“It’s their chance to see new destinations in the Philippines and make the consulate closer to the Filipino community,” she told The STAR. “It’s a very good program to reconnect.” 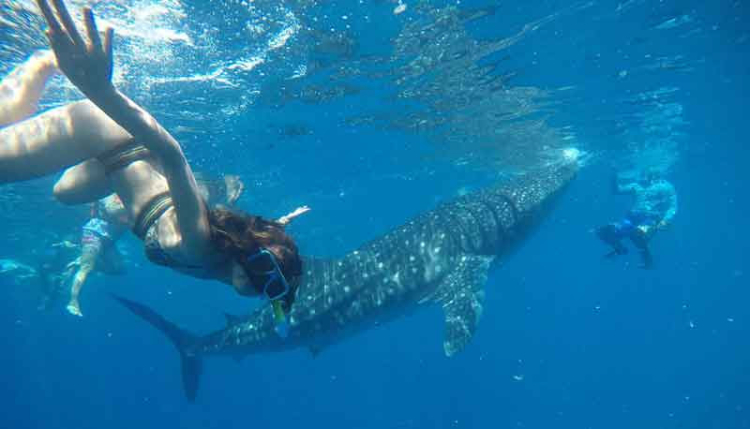 Swimming with the whale sharks in Oslob

Clemente noted that through the years, the tourism department has launched programs revolving around bringing a friend to the Philippines to help boost tourism in the country. “We’re bringing 320 friends!” she exclaims.

Rajah Tours’ Jojo Clemente added the Ambassadors’ Tours will only get bigger and better. In the future, he hopes to encourage a younger generation of Filipino-Americans to join the program by offering tour options that are more geared towards them.

In his speech during the welcome dinner in Cebu, Cruz urged the delegates to consider the Philippines not only in terms of tourism, but also for business and investment. “My dear Filipino-Americans, despite adverse external pressures that influence the growth of our Philippine economy, our country is still a great place to invest,” he said.

“I strongly encourage you to consider the province as your next investment destination. Innate natural beauty, rich gastronomic culture and economic assets are what we have to offer.”

Already, the Ambassadors’ Tour seems to be meeting its objectives. Helen, who has already spent more than half her life in Guam, says that she hopes to retire in the Philippines.

Eleanor from Los Angeles agrees. “We have to come back to our country,” she says.

Though tired from the five days of constant touring in some of the most beautiful places in Manila, Cebu and Bohol, the participants of the 12th Ambassadors’ Tour left with joyful hearts.

As they return to their homes in the US, they travel to the beat of the Sinulog – two steps forward, one step back – echoing the to and fro of the ocean waves, beckoning them back to the Philippines, a home that they will continue to return to.