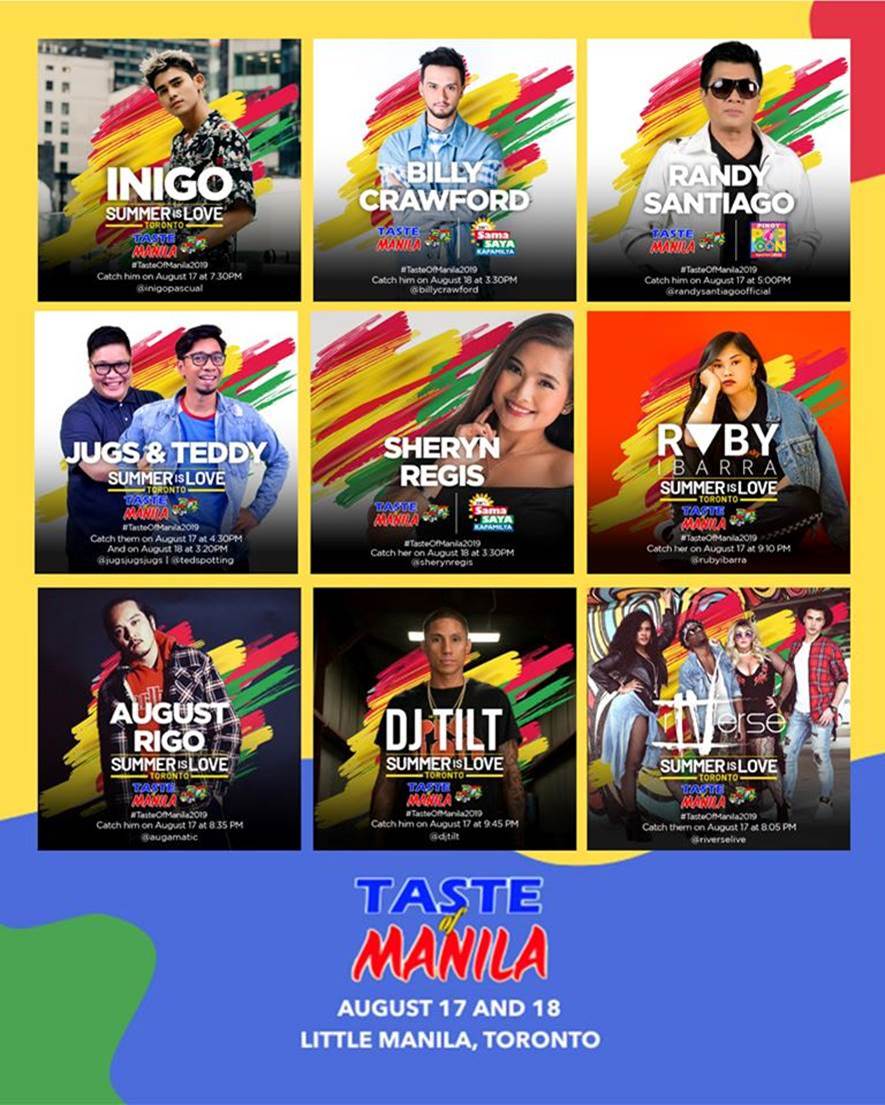 TORONTO, ONTARIO, CANADA, August 14, 2019 –  “Taste of Manila” — the biggest annual outdoor Filipino festival in the world — just got even bigger!  This weekend, August 17-18, at Little Manila, Toronto, the Philippine Legacy and Cultural Alliance (PLACA) teams up with TFC Live to stage “Summer is Love”, a showcase of stellar performances that highlight the event’s TFC Hour.

“We brought in top-rate performers to blend well with the winning food extravaganza that ‘A Taste of Manila’ always offers,” said ABS-CBN Country Manager for Canada Kerwin Du. “And as diverse the food offerings are in this event, so are the genres of music entertainment that TFC is infusing into this colorful celebration of Filipino and Filipino Canadian cultures here in Toronto.”

Pascual recently made waves in the Anaheim House of Blues where he performed before an SRO crowd.  An article from OC Weekly Editor-in-Chief Matt Coker described him as a likely “next big world crossover artist”.  His recent performances has taken him from New York to Los Angeles to Tokyo to London to San Francisco to Honolulu, among others.

Ibarra, who just in June made a lot of buzz with her performance on NPR’s highly popular “Tiny Desk Contest”, has been performing all over North America, awakening many with her sharp lyrics and killer beats that attempt to reclaim the voice and narrative of Filipino American women in society.  Her music has been widely praised. She was featured in a music video commercial with various artists for Mastercard.

Filipino Canadian August Rigo has enjoyed singing, songwriting and producing success, having previously signed deals with Sony/ATV, BMI and Island Def Jam Records.  He co-wrote “U Smile”, “Stuck in the Moment” and “Kiss and Tell” for Justin Bieber, “Solo” for Iyaz, and “Outta This World” for JLS.  He has collaborated as a singer with Busta Rhymes and Cheryl Cole.  He has also released his own albums as well as executive produced for other international artists.

Dizz, Khadija, Zak and Monroe combine powerhouse vocals with clever songwriting, slick beats and stellar songwriting to form the sound of rIVerse, a Toronto-based pop and R&B group.  The overarching message of the group is self-acceptance – being true to who you are and living life to the fullest.  The diversity of the group’s composition fuels this mission.

DJ Tilt is a true music connoisseur, playing a multi-genre style of music with mixes that include the latest House, Hip Hop and Top 40 tracks and everything in between.  He was previously signed by HP (Hewlett-Packard) to be a brand ambassador and Official DJ.  He did a campaign with HP that was featured in all Cineplex Theaters and Best Buy locations throughout Canada.

The wacky duo of Jugs Jugueta and Teddy Cruz of “It’s Showtime” is guaranteed to keep everyone in stitches.  The two are masters of comedy-drama skits complete with sound effects. They have contributed to the success of the show which celebrates its 10th anniversary this year.  Just last March, Jugs and Teddy flew to Indonesia to represent “It’s Showtime” and witness firsthand the pilot episode of its Indonesian version on MNCTV.

Santiago is a certified singing hitmaker who has also achieved huge success in hosting, songwriting, acting, directing and producing. He was one of the top heartthrobs in the 90s and is an accomplished performer in the live concert circuit.  He has appeared in scores of hit films and TV shows and has released several albums.

Houston, Texas-based Regis has performed all over the world after she placed runner-up to Erik Santos in the singing competition “Star in a Million” of ABS-CBN.  She has recorded several hit albums, performed in countless tours, won dozens of Philippine and international awards, and has also endeared herself to TFC viewers as the voice behind several beloved teleserye theme songs like “Maria Flordeluna” and “Gulong ng Palad”.

Prior to becoming one of the Philippines’ top TV hosts/singer/dancer, Crawford has had major chart success in France and other parts of Europe. His single, “Trackin’”, was certified platinum and was number 5 for five weeks in France.  It also reached top 1-3 in the charts in Netherland, Belgium and Switzerland, respectively. His second album, “Ride” turned double platinum (600,000 copies) over there, too. He was chosen to sing the theme song of “Pokemon: The First Movie”.  The multilingual singer (who speaks Tagalog, English and French) has since then focused on becoming a singing-dancing-hosting powerhouse in the Philippines.

Feed your senses and soul at the “Taste of Manila” this weekend! For more information, visit https://mytfc.com/tasteofmanila