SAN FRANCISCO, AUGUST 24, 2020 – The two-day 2020 Pistahan Virtual Parade and Festival got over 47,000 viewers from all over the world including the U.S., Philippines, Canada, United Arab Emirates, Saudi Arabia and Qatar.  The celebration of Filipino culture and cuisine was streamed on Facebook, YouTube and Kumu.

For the last 26 years, Pistahan blossomed to be one of the largest Filipino cultural celebrations in the country held annually at the iconic Yerba Buena Gardens in SOMA Pilipinas Filipino Cultural Heritage District in the heart of San Francisco. Al Perez, president of the Filipino American Arts Exposition (FAAE) that organizes the annual Pistahan, explains how bringing the festival online opened many opportunities.

“We reimagined Pistahan as a way to create space for visibility and representation and to create new experiences for discovery, connection and positivity for festival attendees,” says Perez.

Whereas Pistahan festivals in the past were only seen by people who lived in and around the Bay Area, this year’s virtual format allowed organizers to expand their outreach, invite international guest speakers, and reach a global audience.

Pistahan this year teamed up with Filipino livestreaming super app Kumu in the livestreaming platform’s first-ever festival collaboration in the United States. Piloting several digital festivities together — including a talent search campaign that enabled Kumu contestants to earn over 2 million Philippine pesos — the collaboration resulted in nearly half of all viewers joining the Pistahan Festival livestream tuning in from Kumu.

This year’s theme, One Community: United in Hope and Healing, emphasizes the value of human connection and seeks to instill joy and positivity in these trying times.

Hope and healing can take on so many forms like food, art, and entertainment, and even in these areas, an international presence was felt. 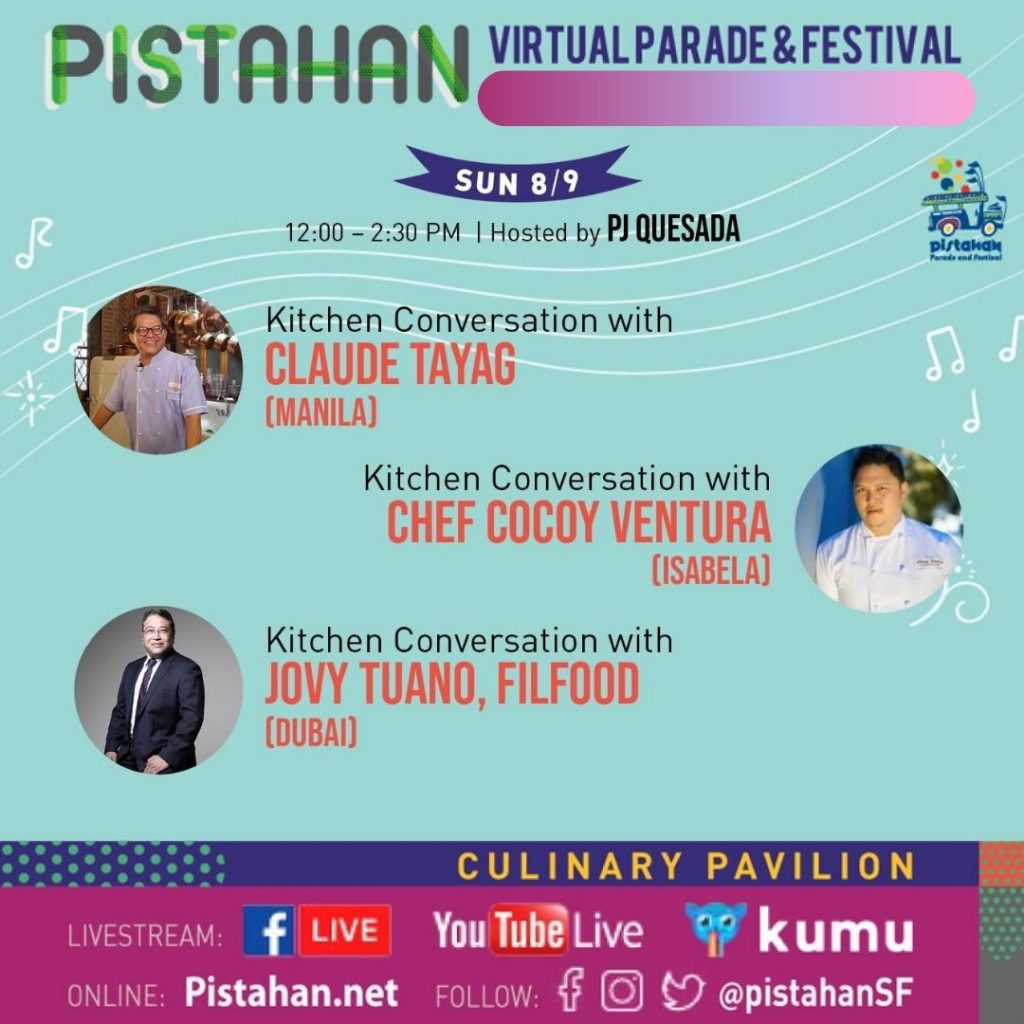 The Pop-Up Food Court supported Filipino restaurants around the world. Attendees could pre-order a special Pistahan meal plate for takeout and enjoy the flavors of the Philippines at home. Pistahan’s online directory featured various restaurants from Northern and Southern California, Pacific Western U.S., Central and Eastern U.S., Canada, the Philippines, and Europe.

Some of the highlights of the two-day festival were the back-to-back TFC show that featured Canada-based multi-awarded singer/songwriter Joey Albert and Bay Area native Yzabel Cabral; and myxTape’s Hella Fresh act with international singer/songwriter Inigo Pascual and R&B/neo-soul artist Kiana V,both based in the Philippines; and rapper/scientist Ruby Ibarra, musical artist Gabe Bondoc, and island soul musical duo CRSB who are all local to the Bay.

Cultivating Goodwill for the Community

Even with a rich presence of guest speakers, performers, and audiences from other countries, Pistahan maintained their local partnership with Bay Area non-profits West Bay Pilipino Multi-Service Center and the United Playaz.

“We are always so happy to be included as partners in the annual Pistahan celebration. This is a great way for Pistahan to give back to the community that it calls home through our organizations,” says United Playaz Founder and Executive Director Rudy Corpuz.

Since Pistahan moved to a virtual platform, festival attendees were encouraged to contribute to the fundraising via the donation portal on the event website. Funds support ongoing projects of West Bay and United Playaz, and programs that sustain Filipino values and cultural traditions by FAAE.

According to West Bay Pilipino Multi-Service Center Executive Director Carla Laurel, “We are also in partnership with UP doing in-person support for summer and the school year for the most vulnerable, including recent Filipino immigrant youth that live in single room occupancies and can’t virtually learn from home because they share a room with their parents and siblings.”

The social benefits Pistahan provides for the community are evident. Laurel says that “Pistahan has always remembered, included, and supported West Bay and UP, so we can continue to support the vulnerable Filipino families that live in SoMa.”

“The way that Pistahan organizers were able to pivot to a virtual celebration was so awesome and creative and clever,” enthuses Corpuz.  “We felt like our community was absolutely global as we watched the weekend festivities and look forward to how these changes can be incorporated into the future,” he adds.

ABS-CBN Managing Director for North and Latin America Jun Del Rosario applauds the efforts of the organizers, saying that “continuing this great Filipino American tradition means we believe in a future, we hope for a future, and we want to play a meaningful role in that future.”

Perez says “There was no playbook on how to do a virtual festival. So, in true Pinoy bayanihan (Filipino collaborative effort) spirit, the team pooled our ideas, energy, and resources together, and we figured out a way to carry the Pistahan tradition forward. It was a result of a lot of love, compassion, creativity, and hard work, combined with inspiring guest speakers, talented performing artists, and amazing community partners. We are truly grateful for everyone’s support!”

ABS-CBN Global COO Olivia De Jesus echoes the importance of the partnership between Pistahan organizer FAAE and TFC. It helps to “remind ourselves that the Galing Filipino (greatness of the Filipino) continues to live and grow through good or bad, through thick or thin, through sunshine or storm.”

The two-day experience provided the organizers the foundation, skillset, and experience to share Pistahan with an international audience. The team will continue to adapt, evolve, and be resilient. As Perez says, “That is the Pinoy way and it is inherently part of the DNA of Filipinos.”