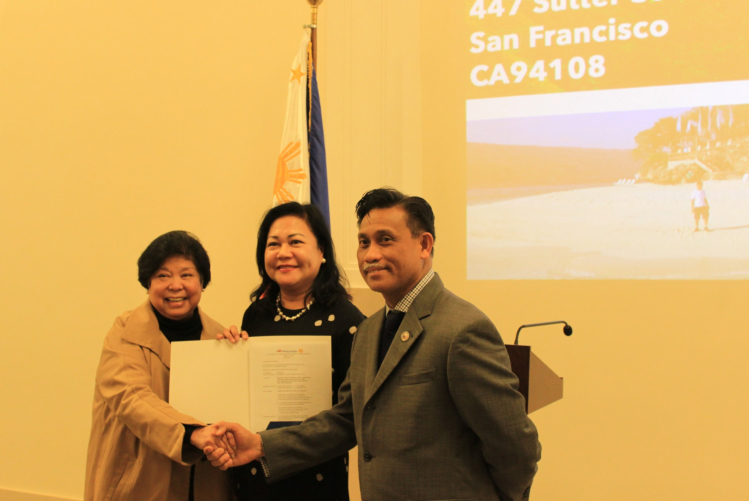 The rain did not deter guests from attending the launch of the 12th Ambassador’s Tour at the Kalayaan Hall of the Philippine Center on Wednesday, 14 March 2018.

Videos of the 11th and 12th Ambassador’s Tours, prepared by Rajah Tours and Los Angeles PCG, respectively, were presented to about 80 attendees, half of which were composed of members of the media, as well as tour operators and travel consolidators.

Consul General Henry S. Bensurto, Jr. welcomed the Community to the Consulate on a rainy Wednesday evening, narrating that the idea of bringing home Filipino-Americans to the Philippines in a curated tour started under former Foreign Secretary Albert F. del Rosario, when the latter was the Ambassador of the Philippine Embassy in Washington D.C.

The Consul General encouraged the attendees to get to know their heritage and roots in the most comfortable way possible through the twelfth iteration of the tour, which “provides tour participants a real feel of the places and the people, with all the conveniences – transportation, VIP treatment in places of interest, the best prices for world-class hotels, the opportunity to meet Philippine Government leaders, and the chance to interact with kababayans along the way.”

Ms. Lyn Abad of Pacific Air Leisure gave a comprehensive outline of the Tour, while Ms. Del Merano, Philippine Airlines (PAL) Area Manager, raffled off a round-trip ticket to Manila for one lucky guest, in celebration of PAL’s 77th anniversary.

Ms. Zeyonce Brown, a home-grown Filipino-American singer, inspired feelings of sentimentality among the guests as she serenaded them with Original Pilipino Music.