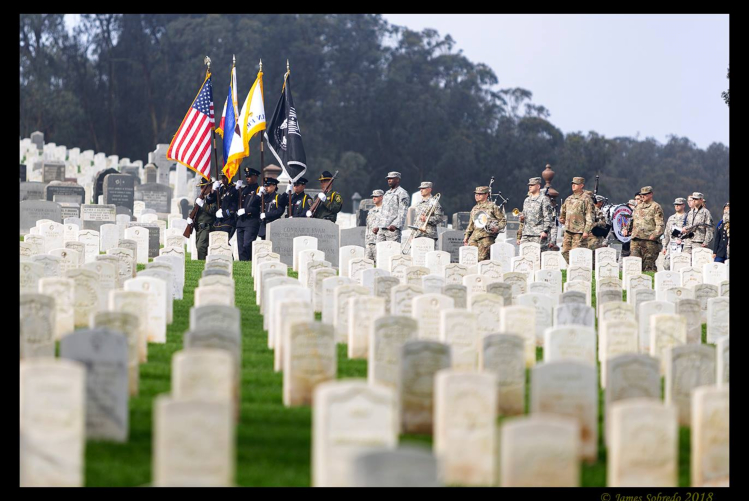 Three volleys of rifles by the Pacific Division/75th Training Command punctuated the solemn moment commemorating “Araw ng Kagitingan”, in observance of the 76th Anniversary of the Bataan Death March at the San Francisco National Cemetery and the Golden Gate Club on Saturday, 09 April 2018.

The Bataan Legacy Historical Society (BLHS), in partnership with the Filipino Veterans Recognition and Education Project (FilVetREP), the Presidio Trust and the U.S. Department of Veterans Affairs, held a meaningful ceremony to honor Filipino veterans who were, after almost eight decades, were awarded the Congressional Gold Medal for their service during World War II.

A crowd of about 400 people gathered at the San Francisco National Cemetery for the procession of Colors to the Officer’s Circle, where the national anthems of the Philippines and the United States were played by the 191st U.S. Army Band.  Rev. Jayson Landeza gave the invocation, followed by the laying of the wreath by Brigadier General Windsor Buzza, Deputy Commanding Officer Pacific Division; Major General Garrett Yee, Director of Networks, Services, and Strategy at the Headquarters, Department of the Army; Major General (Ret.) Eldon Regua, and Deputy Consul General Solano.

Guests were invited to the Golden Gate Club, where Deputy Consul General Solano, in her remarks, lauded the veterans, and the Filipino-American Community who banded together and lobbied for the the Congressional Gold Medal to be awarded to Filipino veterans, “in recognition of their service and sacrifices during World War II”.

Major General Yee, in his keynote address, said that commemorating the event memorializes a tragedy, but it also celebrates the triumph of the human spirit and the bonds that prevailed among cultures during those trying times.  He added that our forebears were “united by a tragedy, while we are united by our compassion for them.”

Retired Major General Regua thanked Cecilia Gaerlan, the Executive Director of BLHS, for the Society’s continued efforts in changing the 11th grade California curriculum to include the sacrifice of the Philippines and its people during the war.  He encouraged everyone in attendance to support the agency’s efforts to have this change adopted in the 49 other states of the U.S., and beyond.

The event concluded with Major General Yee, Major General Regua and Brigadier General Buzza providing replicas of the Congressional Gold Medal to the living veterans and the families of those who have already passed away.