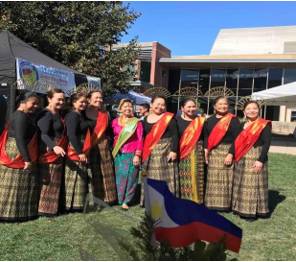 Short documentaries about young members of the Filipino diaspora on growing up abroad and away from the birthplace of their parents were screened on 02 October 2019 at the Kalayaan Hall of the Philippine Center. The youth expressed their mindsets, beliefs and take on life in general, vis-à-vis cultural, religious, technological, and psycho-social influences. The screening, which was a collaboration between ABS-CBN’s The Filipino Channel media and storytelling platform for diaspora communities NextDayBetter was attended by nearly a hundred young audiences.

The Philippine Consulate General in San Francisco graced the 2019 Plaridel Awards on 04 October 2019. The Plaridel Awards is given by the Philippine American Press Club USA to recognize excellent Filipino-American journalists whose works revolve around the Filipino-American community and the community at large. Consul General to San Francisco Henry S. Bensurto Jr. was represented by Deputy Consul General Raquel R. Solano in the awarding ceremony. She lauded Filipino-American journalists for their work that contribute to the development of communities as they continue to live out their Philippine culture and heritage and embrace their adoptive communities abroad. Aside from the Plaridel winners for 2019, Corporate Affairs and Public Relations of ABS-CBN Global Head Nerissa Fernandez and Dr. Richard Kempis were awarded the Torch Bearer award for their leadership and contributions in the community.

The Philippine Consulate General in San Francisco participated in two Filipino-American community events in Livermore. The Deputy Consul General Solano and Consul Vanessa G. Bago-Llona attended a talk led by Pasig Bishop Mylo Hubert Vergara on the Filipinos’ different approaches and practices in observing their Catholic faith on 05 October 2019. The symposium was held at St. Michael’s Parish in its annual celebration of the anniversary of Christian evangelization in the Philippines and in preparation for the 500th anniversary of Christianity’s arrival in the Philippines in 2021. In her remarks, Deputy Consul General Solano stressed the significance of the Filipino diaspora’s expressions of the Catholic faith abroad, which is an essential feature of Philippine culture.

The Philippine Consulate General in San Francisco also attended the Livermore FilAm’s 4th Annual Barrio Fiesta on 06 October 2019 which featured various performances by Filipino-American dance groups and performers. Informative booths were set up, such as facets of Philippine culture and heritage, and on the Bulosan Center for Filipino Studies which aims to continue migrant worker, labor activist and writer Carlos Bulosan’s legacy through education and research in advancing the rights and welfare of the Filipino community in the United States. Consul Dominic Xavier Imperial represented the Consulate in the UN Association-USA East Bay Chapter for the 53rd Annual Parade of Flags in celebration of United Nations Day.

The Philippine Consulate General in San Francisco participated in the 5th Filipino-American International Book Festival presented by the Philippine-American Writers and Artists on 11-12 October 2019.

With the theme, “Humanity, Diversity, and Resistance in the Arts,” the 5th FilBookFest was headlined by Pulitzer Prize Winner Jose Antonio Vargas, who wrote “Dear America: Notes of an Undocumented Citizen.” Filipino authors from the U.S., the Philippines, New Zealand, and Canada, among other countries, participated in the event and talked about their works.

Consul Dominic Xavier Imperial attended the 52nd Fiesta Celebration of Our Lady of the Most Holy Rosary led by the Guiuananons of Northern California in Concord on 12 October 2019.

A film festival and short films competition to celebrate its 26th anniversary was presented by the Filipino Arts & Cinema International (FACINE) on 18-20 October 2019.

The Philippine Consulate General in San Francisco’s Cultural Section attended the film festival which had a line-up of independent Filipino films that “challenge the American occupation in Balangiga, steer into themes of committed and unrequited love, a future look at overseas Filipino workers tilling the lands of other planets, and LGBTQ+ themes.”

Deputy Consul General Solano and Consul Bago-Llona also attended the 9th Filipino Ministry Gala with a Barrio Fiesta theme on 20 October 2019. Filipino members of the clergy and various Bay Area parishes and Filipino-American Catholic parishioners attended the gala held at the Cathedral of St. Mary of the Assumption in San Francisco.