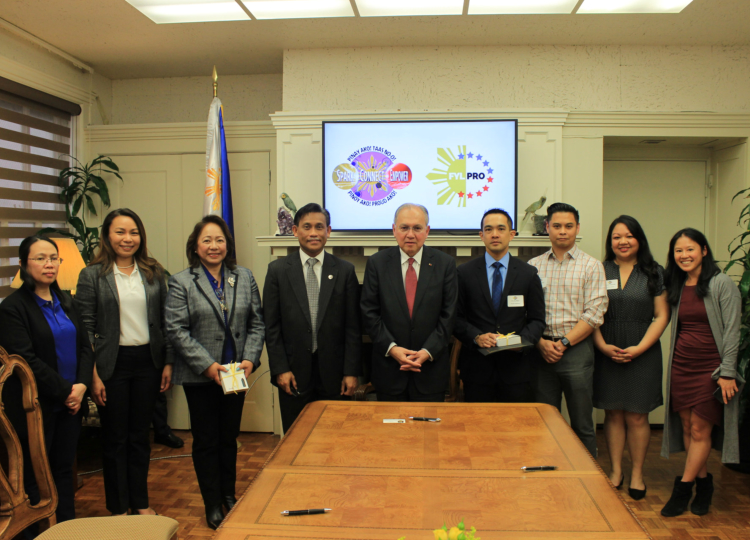 In attendance were over 100 guests from various Filipino community organizations and the media who also took the opportunity to meet the Ambassador who has traveled to San Francisco for the first time in his official capacity.

The SCE movement aims to bring together various Filipino-American organizations and individuals towards sparking love of country among the second, third and fourth generation Filipino-Americans, connecting them with each other through various networking platforms and ultimately empowering them to organize various activities and programs that contribute to nation building.

Ambassador Romualdez, in his keynote speech, praised the SCE movement declaring that “this is the way to go” with respect to cultural diplomacy and encouraged other Foreign Service Posts to emulate this program of SF PCG. The Ambassador also discussed the importance of collective nation building among the youth under the ambit of the SCE movement.

To mark this grand launch, several flagship projects were also inaugurated on said day. Earlier in the afternoon, the Spark447, which aims at providing Fil-Am start-up companies a co-working space at the 4th floor of this building, was officially opened. During the reception for the Ambassador, Mr. JR Calanoc, CEO of Panalo Solutions, presented the SCE website which went live during the grand launch. The SCE’s battle cry, the SCE theme song, composed and produced by Filipino artist and singer-song writer Mr. Dandin Ranillo, was also presented to the public.

Consul General Bensurto, for his part, said: “If this present generation of Filipinos does not exert effort to inculcate or share their culture with their sons and daughters, why would those sons and daughters of yours fall in love with what is Filipino?  This is the challenge before us.”

Several organizations, companies and individuals, who share in the vision of the SCE have pledged their full support and commitment to the objectives of the movement. These groups and individuals, realizing the importance of being united and bringing together their collective projects and programs towards instilling love of country and pride of heritage among Filipinos all over the world, have partnered with the Philippine Consulate General in San Francisco to affirm their commitment. Among them are PLDT, Philippine Airlines, The Filipino Channel, National Federation of Filipino American Associations (NaFFAA), One World Institute, Mama Sita’s.

A briefer on the SCE Movement containing a complete list of the SCE partners is attached to this Press Release.

If you or your organization is interested in becoming an SCE partner, kindly email [email protected] for more information.