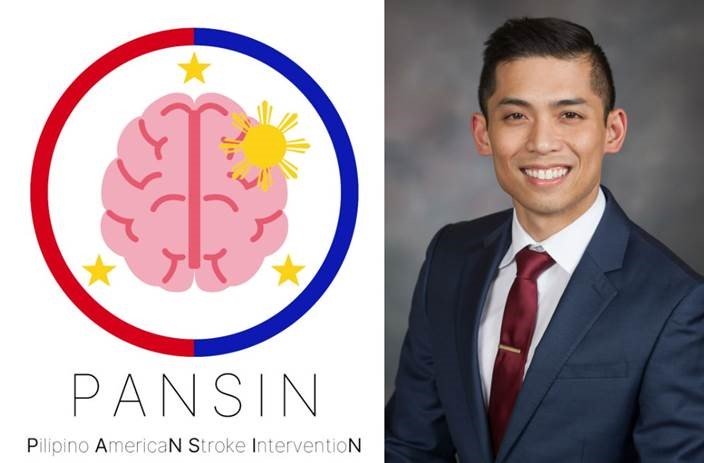 The American Heart Association’s Heart and Stroke statistics in 2019 specifically mentioned that “someone in the U.S. has a stroke every 40 seconds on average.”

A recent American Heart Association publication in March 2019 also demonstrated that Filipino Americans have the greatest years of potential life lost from stroke compared to any other Asian subgroup in the United States.

As the holiday season kicks into full gear this Thanksgiving, it’s good to be reminded that several research studies throughout the years have revealed that death rates from heart attack and stroke tend to spike around the holidays.

“As a Filipino American neurologist myself, I have witnessed how FilAms oftentimes avoid going to the hospital and avoid taking care of their health until it is too late,” said Doctor Moya. “This is especially concerning since a stroke patient can lose approximately 2 million brain cells for every minute of that patient’s stroke.  Time is of the essence when treating stroke.”

Dr Moya added: “I believe that genetics, health behaviors, and lack of knowledge on emergency stroke care among Filipinos leads to this saddening statistic. This has personally affected me as my grandmother died from her stroke surrounded by family who were not able to quickly identify her stroke and who waited too long to bring her to the hospital, ultimately leading to her untimely death.”

In the PANSIN Project, Doctor Moya and his team have identified the key cultural and knowledge barriers that stop Filipino Americans from obtaining emergency care for stroke. Collaborating with filmmakers Joanne Ducot (scriptwriter) with Aser Santos and his team from Juniper Visuals, they were able to shoot in one day this powerful video about stroke and the need to call 911 for emergency stroke care.  Actors include Tita Domingo Pambid, Rachel Gallardo and Dat Nguyen.

“We are so excited to have this work shared by TFC to help Filipinos globally proactively reach out for help during a stroke,” said Doctor Moya.

Doctor Moya shared: “Our vision is to create and refine Filipino health videos and media tools that are culturally-relevant and emotionally-valent, resonating with Filipino audiences globally.  We know that in this age of social media, people can easily disseminate videos like this throughout the Internet, mobile phone devices, and traditional television programming.  We want to create more Filipino health videos like this for diseases such as heart attacks, diabetes, Alzheimer’s Disease, cancer, HIV, etc. specifically focusing on diseases that are more prevalent among Filipinos.”

In PANSIN’s preliminary research, they have discovered the following themes with regard to Filipino American attitudes toward health:

Spiritualistic fatalism (“Bahala na”) and the belief that God is in control of all outcomes without having to exercise an individual’s gifts of free will and reason; fear of calling 911, specifically linked to shame in being perceived as unhealthy by neighbors and community, fear of deportation among undocumented Filipino Americans, and fear of high ambulance cost.

Elderly participants in PANSIN’s research perceive social media as one of the most effective ways to widely engage Filipino Americans on stroke.

“We thank the UCLA National Clinician Scholars Program for helping to fund this research as well as our video.  We also thank the Historic Filipinotown community, specifically Filipino American Service Group Inc. for allowing us to conduct our research at their center and film at their site,” said Doctor Moya.