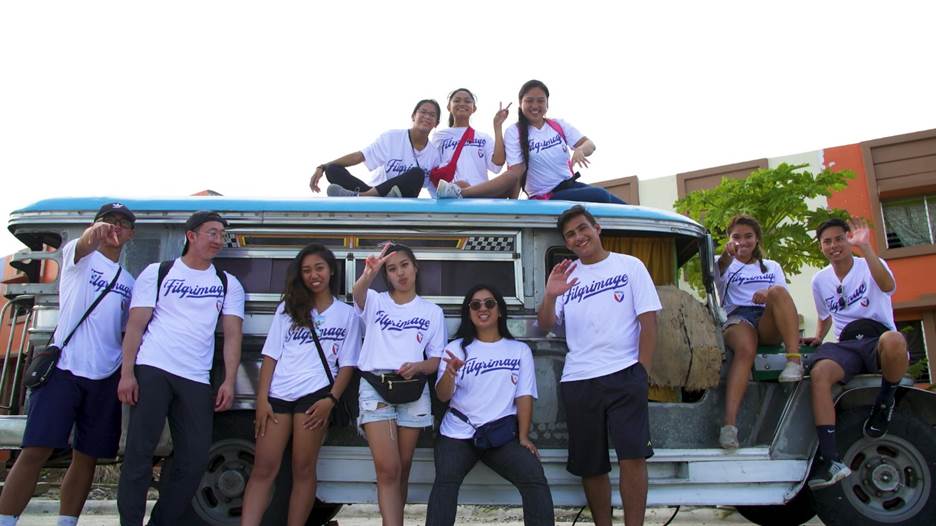 SAN FRANCISCO, October 6, 2020 — The series trailer for Filgrimage opens with a local saying, “Welcome to the Philippines!” The excitement and eagerness of the young travelers reflect the tone of the journey ahead of them: exhilarating sights, a cacophony of sounds, sumptuous cuisine, an experience full of surprises and deep self-reflection.

Filgrimage follows eight young students who chose to spend one summer in the Philippines to nurture their Filipino roots, and to answer the question, “What does it mean to be Filipino?”

The series starts streaming on October 22 on iWant TFC on TFC IPTV, and on TheFilipinoSchool.com, and will also be seen on TFC via cable, satellite and on myxTV starting October 24. 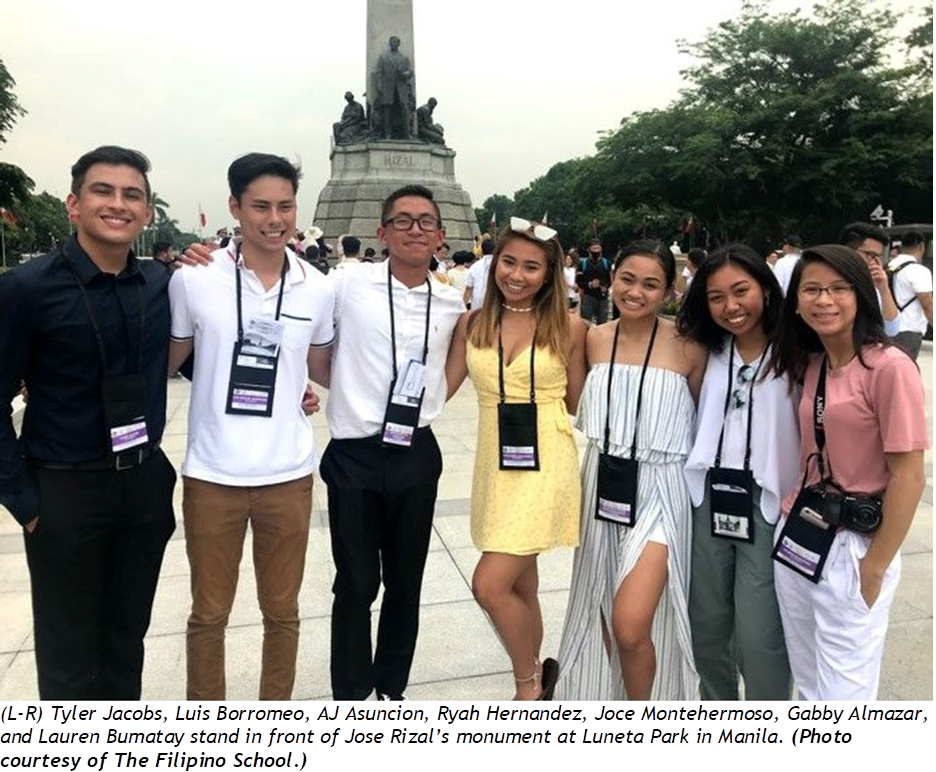 The Roots of Filgrimage

On their website, Filgrimage is described as “a Filipino pilgrimage” and “a transformational experience that connects the next generation Fil Ams to their rich and proud heritage.” It is a project of The Filipino School.

Olaes, who was born and raised in the U.S., reluctantly made his return visit to the Philippines in 2006 when his parents chose to move back to the homeland to retire. It was a trip that changed his life forever. 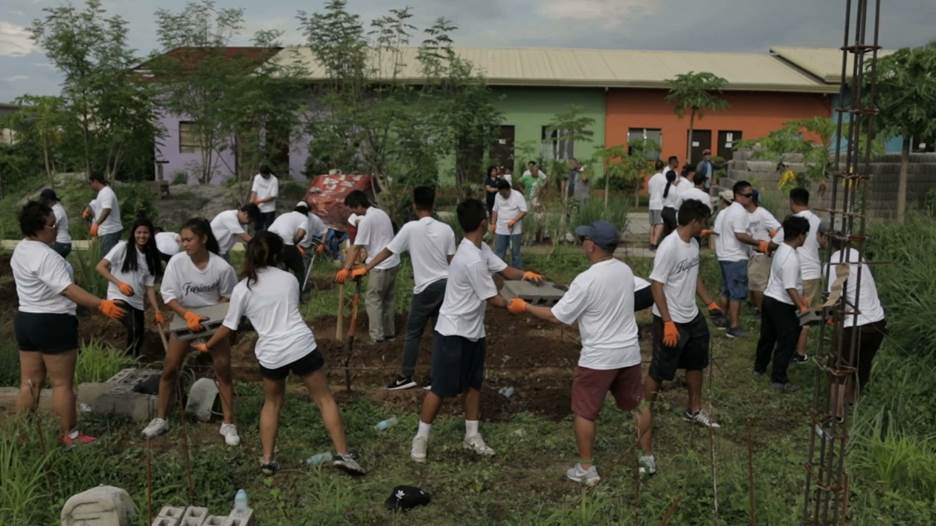 The Filgrimage Ambassadors, together with other participants in the immersion trip, help lay the foundation for a few houses at the Gawad Kalinga community in Cavite. (Photo courtesy of The Filipino School.)

Olaes said, “I was never proud of being Filipino because all I would see on American TV was bad news about the Philippines. The brand was always that people there were poor, corrupt and kidnappers.”

Those fears of entering the Philippines quickly dissipated when he walked through a slum area and was greeted with warm smiles and hospitality. He recalls that his transformation happened in a place that is now a Gawad Kalinga village, which is also part of the Filgrimage itinerary.

Olaes shares, “There was this automatic connection toward these extremely poor people I didn’t even know. I somehow literally embodied their pain and their struggle. It was such a profound feeling in my heart that something had to be done. I had never felt this way, ever. This is when I learned the word: Bayanihan. It means coming together for a greater purpose, and when everybody comes together, the load gets lighter, and all things are possible.”

From there, he wanted to replicate his experience to have others like him find their identity and help solve the problem he saw.

A Partnership is Born

Fernandez believes that Filgrimage will challenge viewers and those who make the trip. According to her, “there can no longer be vacillation and oscillation on identity.”

Fernandez and Olaes agree that “heroism does not happen without action.” The meaningful adventures of the Filgrimage ambassadors captured in the series must be shared with many others.

The goal of the series is two-fold: (1) to awaken the hearts of the next generation of Filipinos all over the world who would never aspire to go back to the motherland, and (2) build Filgrimage Villages for 1000 poor families through the spirit of Bayanihan (the spirit of communal unity and cooperation).

The ambassadors went on a soul-satisfying, life-transforming 11-day trip around parts of the Philippines that included Manila, Bataan, Clark, El Nido in Palawan, Fort Santiago, Corregidor, and Cavite.

AJ, the youngest in the group, had heard of the Filgrimage trip in the past and how it has transformed those who joined the tour. He shares that “I was most excited for who I would become after the trip, as well as reinforce my Filipino roots.” 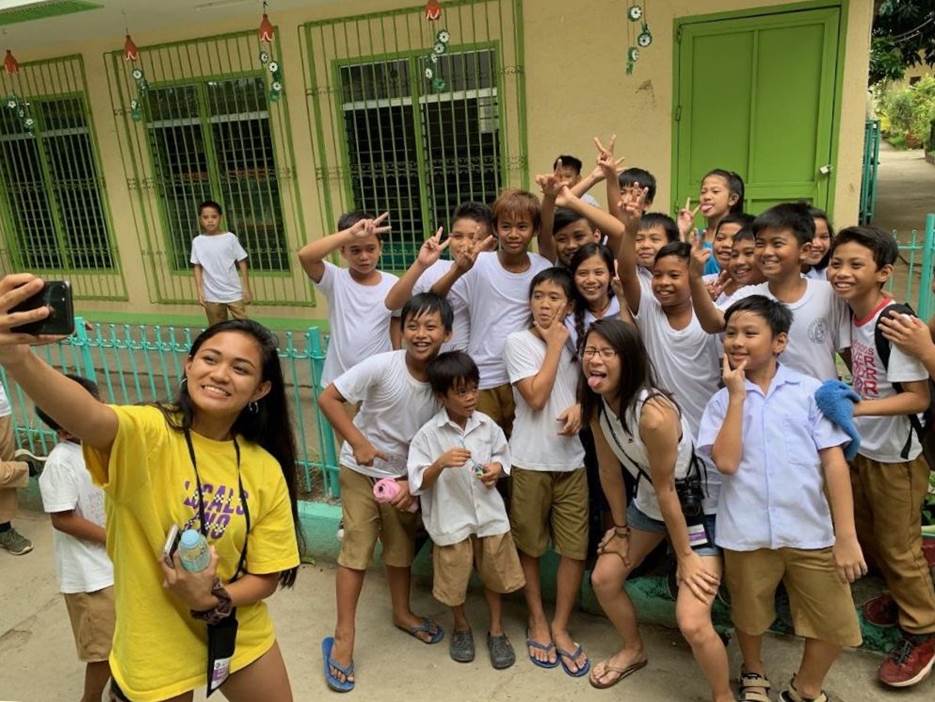 Filgrimage Ambassador Jocelynne Montehermoso (foreground) takes a group photo with their new friends – the students at Balanga Elementary School in Bataan, in the Central Luzon Region of the Philippines. (Photo courtesy of Pia Lopezbanos-Carrion)

It was Jocelynne’s first ever visit to the Philippines and one of the main things she realized is how “bayanihan is borne within us and unites and defines us as Filipinos.” She adds, “After the trip, I felt more connected to my people.”

For Ryah, there was an awakening. She shares, “Growing up in a predominantly white school and wanting to be something I’m not, I realized that I should no longer be ashamed of my culture because it is filled with the most selfless, appreciative and humble people ever.”

For many, the experience did not always start during the arrival at the Ninoy Aquino International Airport.

For the Filgrimage ambassadors, their parents immigrated to the United States due to several factors, whether it be due to family ties in America or in search of economic opportunities, the result is still similar. A product of immigration is assimilation, and because of this many of the children are born into American culture, yearning to reconnect with a culture and people separated by thousands of miles of land and water.

Fernandez believes that Filgrimage allows one to come full circle where Filipino identity is concerned. The experience aids in understanding the previous generations who immigrated.

Those who make the journey begin to feel deeper appreciation for their parents who have made sacrifices; greater gratitude for their current country and its opportunities; and a stronger desire to do something in order to give back to the homeland.

Filgrimage is co-presented by TFC, The Filipino School, and Choose Philippines. The series starts streaming October 22, 2020, Thursday on iWant TFC (iWantTFC.com), on TFC IPTV, and on TheFilipinoSchool.com.

Filgrimage will also be seen on myxTV and on TFC Cable and Satellite starting October 24.