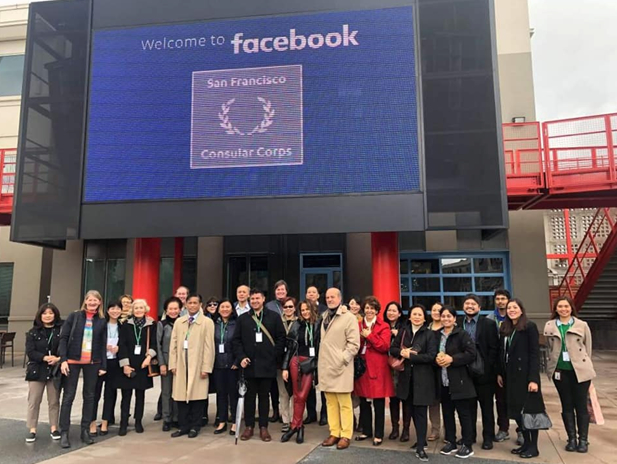 Facebook’s Product Policy Group officers, led by Ms. Brenda Tiery,Head of Policy Visits, welcomed the group in a guided tour of the campus and provided a briefing led by Mr. David Caragliano, Facebook Manager of the Product Policy Group, and Ms. Karuna Nain, Facebook Manager on Global Safety Public Policy Programs. The briefing was informative as it discussed Facebook’s policies related to content and Community Standards, i.e., content that can and cannot be shared on the site.

The visit gave a glimpse of theworking environment at Facebook, which aims to foster innovation and creativity among its employees. LSFCC members were shown various amenities of the Facebook campus, including restaurants, game arcade, gardens, meeting rooms, among others.

Mr. Caraglianounderscored the three (3) core values of Facebook as a company: safety, voice,and equity. Facebook aims to ensure the safety of Facebook users, give people avenues to express themselves and connect them within the community of users and provide equity for all. Several concerns raised during the meeting, included issues of name-shaming and bullying insocial media platforms, such as Facebook, spread of fake news, and privacy settings/choices in using Facebook.

Mr. Caragliano informed the group that the content policy team receives and reviews insights from experts around the world to understand the various contexts, based on which content is shared and viewed on Facebook. He stressed that Facebook strives to strike the right balance between giving people a platform to express themselves and promoting a welcoming and safe environment for the users and viewers.