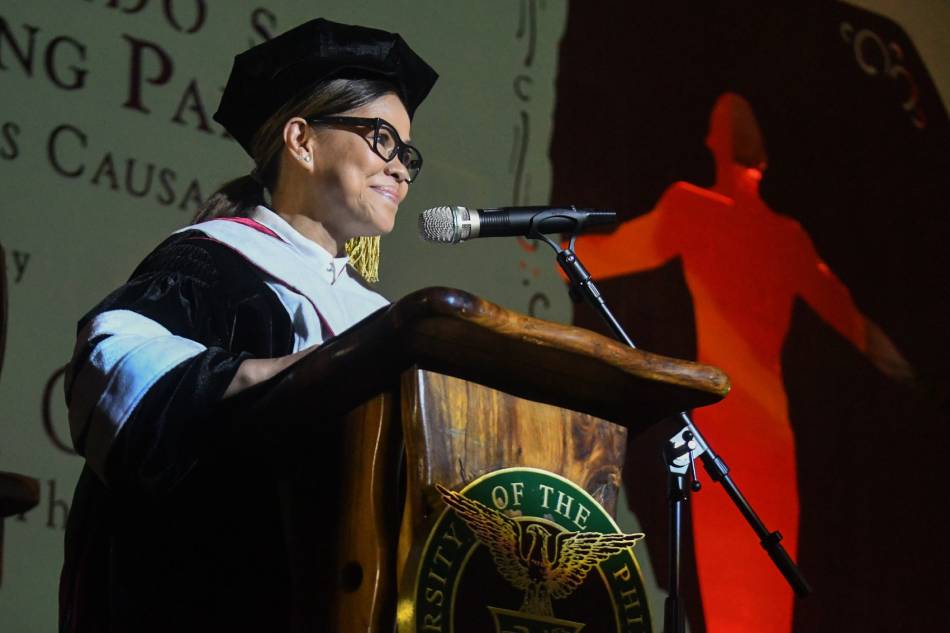 MANILA, PHILIPPINES, November 11, 2019 — The University of the Philippines (UP) has conferred an honorary degree upon Cristeta Comerford, the first Asian and first female executive chef of the White House.

Comerford received the degree of Doctor of Humane Letters, honoris causa, on Monday at the Bahay ng Alumni of UP Diliman.

Before going to the United States in 1983, she studied BS Food Technology at the College of Home Economics in the Quezon City-based state university.

In her acceptance speech, Comerford recalled how her love for food and cooking started, stressing the importance of remembering one’s roots.

“One of my most favorite Tagalog salawikain goes like this, and it could be yours as well: ‘Ang hindi marunong lumingon sa pinanggalingan ay hindi makakarating sa paroroonan (The one who does not know how to look back at where one came from will not reach the destination),’” she said.

“Maasin, San Rafael, Bulacan is where it all started for me,” she went on, sharing stories from her summer breaks with her grandparents at the farm. “This is where I began to understand the values of work ethics, perseverance, and community. This is where my earliest and fondest food memories ignited my passion and interest in my profession.”

ABS-CBN News interviews FilAm Sonia Delen, president of the UP Alumni Association of America-San Francisco chapter.  Back in August 2019, UPAAA-SF hosted a Distinguished Speaker Series that included Cristeta Comerford who spoke on the “ELEVATE Panel: Raising the Profile of the Filipino Globally” with ABS-CBN Global Head of Corporate Affairs & PR Nerissa Fernandez and Jacquiline Romero, Ph.D., quantum physicist from the University of Queensland, Australia. Among the distinguished speakers in the 2-day event was ABS-CBN Global COO Olivia De Jesus who spoke at the “LEAD Panel: Leading by Example, the UP Way”.  (Photo by Joyce Jimenez/ABS-CBN Global)

Working at the White House since 1997, Comerford was promoted to executive chef in 2005 by former First Lady Laura Bush.

She has since continued to serve succeeding US presidents, their families, and guests.

Her appointment has made her a member of Le Club des Chefs des Chefs, an exclusive organization of 26 chefs of heads of state around the world. It promotes culinary diplomacy, the safeguarding of culinary traditions, and healthy, well-balanced gastronomy.

Comerford has served as consultant and resource person to US government agencies, such as the Department of Agriculture, Department of State, and the Federal Bureau of Investigation. Her position, as well as her advocacy for healthy eating, has led her to become the subject of press interviews, a guest in many talk shows, a keynote speaker at conferences, and a lecturer-presenter in workshops and panels across the US.

In 2014, Comerford received the Gawad ng Pangulo Pamana ng Pilipino Award, one of the three presidential awards for overseas Filipino individuals and organizations.