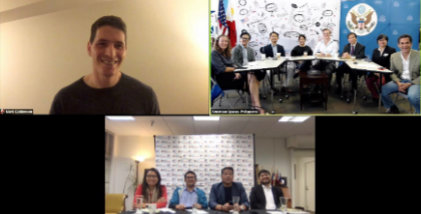 In celebration of Global Entrepreneurship Week, the Philippine Consulate General in San Francisco, through its Philippine Trade and Investment Centre – Silicon Valley, co- organized with the U.S. Embassy in Manila, a Virtual Roundtable Discussion entitled “Ecosystem Connect” held simultaneously in Manila on 14 November and San Francisco on 13 November.

“Ecosystem Connect” aimed to gather experts in the start-up industry in both countries to discuss emerging global trends and opportunities for Filipino start-ups. Two panels were simultaneously set-up, one at the Philippine Center in San Francisco, and the other at the American Spaces facility in the U.S. Embassy in Manila.

The San Francisco Panel was led by the Consulate’s Economic Officer, Consul Jed Llona, and Trade Commissioner Celynne Layug, and was composed of Mr. Earl Valencia, a venture advisor for start-ups and corporate innovation, and currently a Managing Director at Charles Schwab Company; Mr. Al Lim, CEO and Founder of Xtrilogy Ventures, which helps early stage startups to grow, and general manager of Spark447; and Mr. Mark Goldenson, who started four companies in different industries.

The Manila Panel was led by U.S. Embassy Economic Officer Stephanie Moniot and Mr. Philip Roskamp, Counselor of the Embassy’s Public Affairs Office, and was composed of representatives from Ideaspace, Kickstart, Endeavor, Ignition and Manila Angels.

The event generated lively discussions on the start-up industry in the Philippines, including the value of mentorships and the need to identify niche sectors. Positive developments, such as recent legislation on the Ease of Doing Business and the Innovative Startups Act, were cited.