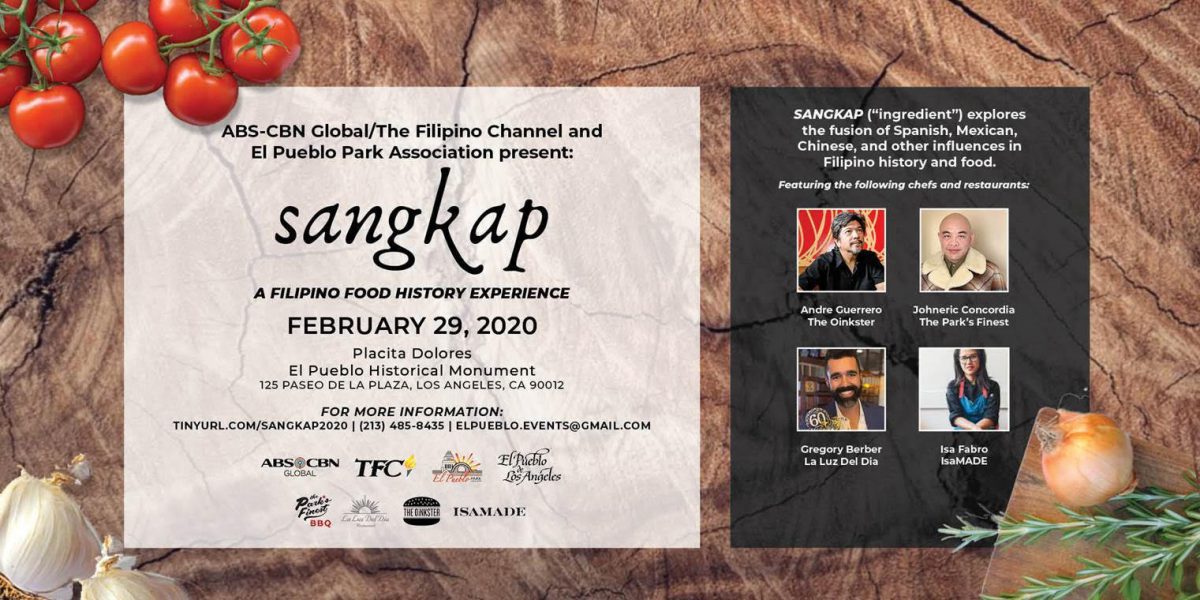 First-of-a-kind foodie event this Saturday, February 29, to celebrate Philippine cuisine at the birthplace of Los Angeles

LOS ANGELES, CA, February 26, 2020 – This Saturday, February 29, from 11am-5pm, the Philippines will represent at the El Pueblo Historical Monument – the birthplace of Los Angeles – with a first-of-its-kind event via SANGKAP Filipino Food History.

Among the exciting activities at SANGKAP will be a food history presentation by Prof. Susie Ling, a historian from Pasadena City College, which will be followed by a panel discussion.  The event will also feature live cultural performances, public art displays, interpretive sharing of Filipino and FilAm histories, and other family-friendly activities.

“Filipino food today as shaped by Philippine history consists of Malay matrix, into which melded and blended influences from China and India (through trade), Spain and America (through colonization), and more recently the rest of the world (through global cultural communication),” wrote the late food critic and author, Doreen G. Fernandez.  According to New York Times, other Asian cuisines have been part of the American landscape for decades, but only in recent years have Filipino dishes started gaining recognition outside immigrant communities.

Why at El Pueblo de Los Angeles Historical Monument? The location is near the site of the early Los Angeles pueblo or town where 44 settlers of Native American, African and European heritage journeyed more than 1,000 miles across the desert from present-day northern Mexico and established a farming community in September 1781. Since that time, Los Angeles has been under the flags of Spain, Mexico, and the United States and has grown into one of the world’s largest metropolitan areas.

Today, as a department of the City of Los Angeles, El Pueblo is a living museum that continues to fulfill its unique role as the historic and symbolic heart of the city.

SANGKAP Filipino Food History is presented by ABS-CBN-TFC and El Pueblo Park Association. This is in partnership with The Parks Finest, Thunderbolt Bar, The Oinkster, La Luz Del Dia, and IsaMADE, with support from the Arts Management Program at Claremont Graduate University, and UCLA Asian American Studies Department.