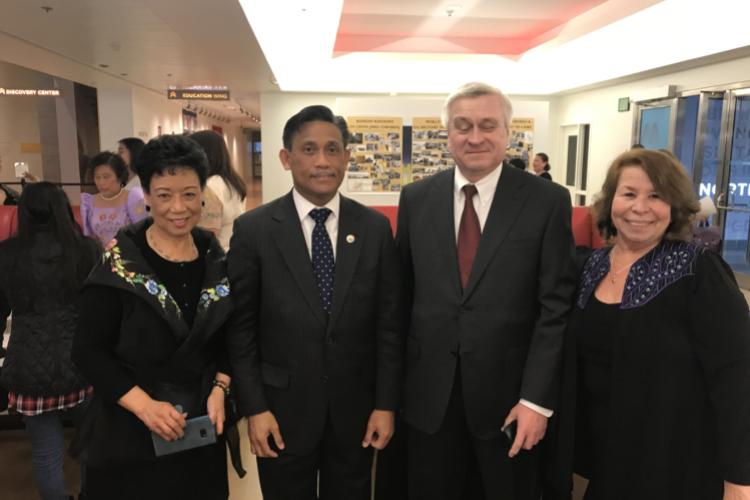 The Congress of Russian Americans, the Russian Cultural Center of Alaska, and the Alaska Federation of Filipino Americans, Inc. held “Tiempo Russo” an exhibit and film showing documenting the experiences of White Russians during the 1940s, when they were forced to leave Shanghai as China was overtaken by Communism.

Consul General Henry S. Bensurto, Jr. and Mrs. Mariza Bensurto attended the Exhibit, which was held at the Anchorage Museum of Rasmuson Center in Anchorage, Alaska, on Saturday, 24 March 2018.

The event was held to celebrate and further cement relations of the Russian and Filipino Communities in the United States.

“Tiempo Russo” was conceptualized and brought to life by the Congress of Russian Americans and the Philippine Consulate General in San Francisco back in 2016.  The project consisted of several events – an exhibit and a documentary viewing of “Tiempo Russo” at the Philippine Center, and a closing ceremony held at the Russian Consulate. It has, since then, been nominated for the Silver Archer award for best project for “Tiempo Russo Tubabao Island”.  The Silver Archer – USA Awards recognizes the most successful projects that work to further intergovernmental, cultural, economic and social ties between Russia and the US.

The Consulate played a crucial part in the conceptualization, and provided a venue for the exhibit. At that time, the International Refugee Organization (IRO) called on nations to open its doors to these White Russians, and only the Philippines, with the prodding of the United States, agreed to host some 6,300 Russian refugees in Guian, Samar.

Consul General Henry S. Bensurto, Jr. said that the meaningful moment in the shared histories of the Philippines, Russia and the United States was an “exchange of cultures, a sharing of values, and forming of friendships between the inhabitants of Tubabao and the Russians.  The experience formed part of the foundation that built relations among the three countries into what it is today.”

In attendance were the Mayor of Anchorage Ethan Berkowitz; Deputy Consul General of the Russian Federation in Seattle, Khalit Aysin; President of the Congress of Russian Americans Natalie Sabelnik; Policy and Program Specialist, Office of the Governor of the State of Alaska Elsa Sargento, and leaders of the Filipino-American Community.

The Anchorage Museum was filled with guests who were able to view the “Tiempo Russo” documentary, as well as an exhibit of photos and memorabilia of that period.  The event also showcased Filipino cultural performances, including the tinkling, cariñosa and an Igorot dance that were performed by members of the Filipino-American Community, some of whom were as young as ten years old.

Consul General Bensurto took the opportunity to meet with leaders of the Filipino-American Community in Anchorage at a potluck that was held the following day, 25 March 2018.  He encouraged the Community to continue interfacing with the Consulate for their consular needs, and committed to holding a consular outreach in Anchorage in 2018, in response to the needs of 30,000 Filipinos who call Alaska home.

He encouraged the Community to join the Consulate’s movement to Spark*Connect*Empower*, to magnify the Community’s efforts in preserving and promoting Philippine history, culture and heritage, not just among Filipinos, but to the greater Community.